Balkan hutsBalkan galeryBalkan trailshut booking
The Balkan Range Mountains (Stara Planina) is situated in the hearth of Bulgaria. The Balkan Range runs 560 km from the border between Bulgaria and Serbia in the eastward direction through the whole country until it reaches the Black Sea. Because of its location, it is not appropriate for skiing holidays in Bulgaria and other similar activities. Safety is important in the mentioned winter ventures and the Stara Planina is somewhat hazardous for them. The width of the range is between 15 and 50 km. The highest part of of the Stara planina is in central Bulgaria. The highest peak is Botev (2,376 m), located in the Central Balkan National Park.. 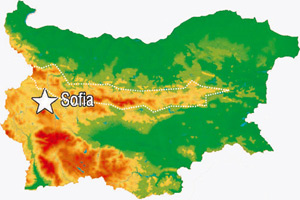 The In ancient times the Thracians and the Greek called the rage Haemus after the name of the King Haemos of Thrace from Greek mythology. Slavic people called it Matorni gori, and the Turks called it Kodjabalkan or Balkan. The mountain gives the name of the Balkan Peninsula.The Stara Planina Mountains plays a significant role in Bulgarian history. In medieval times it was a natural boundary of the Bulgarian state. It was also a home for freedom fighters in the whole history of Bulgaria. The Balkan Range is very impressive. Endless dense beech forests cover the lower slopes of the mountain, and on the higher altitudes cragged rocks rise up over mighty rolling hills. Many high waterfalls give a beginning of a clear water streams running fast in the steep gullies. Vegetation is lush, and bears, wolves, dear, and boar wander around.